Andrea is a three-time British Olympic 100m athlete who competed in the 1972 Munich Games, the 1976 Montreal Games and the 1980 Moscow Games, she is also a former British 100m record holder. Andrea still remains the highest performing British female 100m runner in the Olympics in the last 40 years after coming 7th in the 100m final at the 1976 Olympics.

Following her retirement from professional sports, Andrea embarked on her ambition to give back to her local community, and to train aspiring athletes giving them the opportunity to reach their full potential. Andrea now lives and works in South London, inspiring and encouraging children to participate in sport and giving them the chance to access fantastic facilities which have seen many Olympic athletes train before them.

Andrea founded community organisation Kids Are People Too through which she provides athletics and sports coaching for young people, runs events such as a Youth Olympics and Kids of the Commonwealth for London school children and organises holiday camps, giving children the opportunity to meet other world class athletes.

Through her work Andrea is seeking to help children get into sport, take exercise, stay fit and healthy and gain access to great facilities like Battersea Park Athletics Track. Andrea is a fully certified coach and can be contacted for private sports coaching and classes.

"Love of the achievement rather than the reward."

Kids Are People Too – Summer Camp

An Afternoon of Athletic Events and Fun 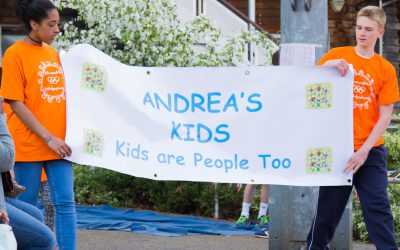 Children of the world event

Hello, I am writing to update you on an exciting new event hosted by Kids Are People Too, This year,… Read More